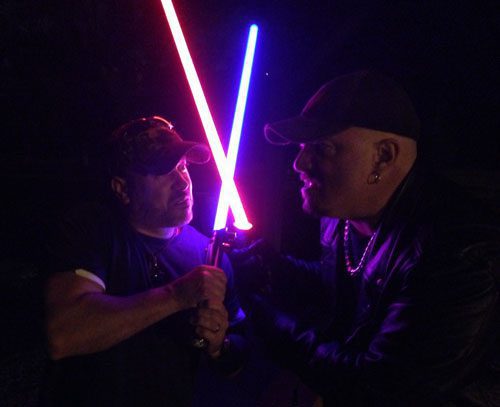 Tonight on Spike TV (Jan 10th at 10/9 central) is the premiere of 10 Million Dollar Bigfoot Bounty, a reality contest show hosted by Dean Cain where teams of contestants search the woods for that other big walking carpet. One of the teams of 2 is a pair of Star Wars fans, Rictor Riolo and Dax Rushlow – pictured using FX Lightsabers as part of their hunt for Bigfoot… yes, you just read that right, using lightsabers to track the legendary Sasquatch. Rictor, seen here on SSG back in the day as GayJedi, has a blog article up on StarWars.com about his experience as a Star Wars fan on a reality show about the search for Bigfoot. Aside from the unusual use of lightsabers, Riolo’s action figure hobby also gives him background on collecting evidence of the mythical “Skunk Ape” – this reporter has witnessed Rictor’s tireless hunts for other mythical creatures such as orange-backed ’96 POTF2 figures.

The StarWars.com blog doesn’t mention it, and surprisingly neither does the team’s bio on the show’s Spike TV site, but Riolo is also the only openly gay contestant on the show, as you probably might have guessed from his username. His sexual orientation caused a little strife among some of the other contestants, lots of them hunters and outdoorsmen, but that’s par for the course on reality competition shows, and Rictor says at the end of the day they were all one big family, if perhaps a dysfunctional family. Will Rictor and Dax find definitive evidence of Bigfoot and collect the $10mil bounty, showing up all the other teams and bringing honor to Star Wars fans everywhere who already knew Bigfoot was a Wookiee living on Earth? You’ll just have to tune in and find out, and “may the forest be with you”.

‘A Toy Store Near You’ Trailer