Drawing from the success of its interactive storytelling products, Disney Publishing Worldwide today announced the launch of “Star Wars Journeys,” a new episodic series of apps featuring the stories, heroes and villains from a galaxy far, far away. With immersive story content and fast-paced activities and game play, “Star Wars Journeys” apps will introduce the epic Star Wars universe to the next generation of fans like never before. More than half a dozen apps are slated for release for the Kids and Entertainment categories of the App Store; “Star Wars Journeys: The Phantom Menace” is available now and additional apps in the portfolio will roll out in sequential order leading up to the release of Star Wars Episode VII.

Each “Star Wars Journeys” app includes interactive features that fully immerse readers in the franchise’s epic adventures, including a 180-degree parallax viewing experience, infinite zoom scene transitions, collectible character profiles, brand new art, and unlockable hidden content. As The Force is strong with these apps, each will also feature a set of unique activities that deepens the story experience.

“The Star Wars film franchise has continuously excited and engaged audiences of all ages for more than 30 years” said Andrew Sugerman, executive vice president, Disney Publishing Worldwide. “Now, Disney Publishing is connecting Star Wars fans to their favorite franchise through a series of innovative new apps that combine storytelling, play, and technology for an epic experience. We are thrilled to help introduce the Star Wars universe to the next generation of fans, and provide those already familiar with the power of The Force new ways to connect with this legendary franchise.”

“Star Wars Journeys: The Phantom Menace,” which is available now for iOS, reveals the first story in the classic saga in an explosive new way. As readers tap and swipe their way through the story, they are challenged to fast-paced races across four different galaxies in customizable anti-gravity podracers where they can earn special rewards that allow them to complete the story. Additional apps in the “Star Wars Journeys” portfolio rolling out in the coming months include:

The Star Wars mobile apps portfolio will continue to evolve with the addition of an all-new category of user generated creativity apps, leading up to the release of Star Wars Episode VII. The new suite of apps will offer fans unrivaled storytelling experiences by providing them unprecedented access to the rich Star Wars universe they know and love. Through technology and innovative storytelling tools, these new apps will deliver deeper engagement and unlock imaginations in only a way Disney can.

“Star Wars Journeys: The Phantom Menace” can be found on the App Store in the Kids and Entertainment categories. For additional Star Wars mobile apps updates and information, visit www.DisneyStories.com, Facebook at Facebook.com/disneyreads and Twitter at @DisneyReads.

Lucasfilm Ltd., a wholly owned subsidiary of The Walt Disney Company, is a global leader in film, television and digital entertainment production. In addition to its motion-picture and television production, the company’s activities include visual effects and audio post-production, cutting-edge digital animation, interactive entertainment software, and the management of the global merchandising activities for its entertainment properties including the legendary STAR WARS and INDIANA JONES franchises. Lucasfilm Ltd. is headquartered in northern California.

STAR WARS and related properties are trademarks in the United States and/or in other countries of Lucasfilm Ltd. and/or its affiliates. (c) & TM 2014 Lucasfilm Ltd. All rights reserved. 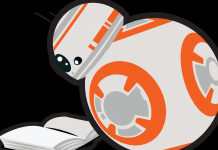