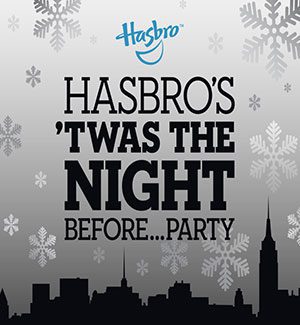 At Hasbro’s ‘Twas The Night Before… Party, we asked Joe Ninivaggi, the senior brand manager of global marketing for the Hasbro Star Wars team, several questions about the line.

SSG: The new Toys R Us exclusive Reveal the Rebels set with Kanan and Ezra has the holographic Obi-Wan that’s hidden in the package.  Presumably that was done to preserve the secret of them being Jedi, but is that something we might see again in the future?

JN: Sure, absolutely.  I mean, that whole program with TRU has done really well and we’re really excited about the Reveal program.  It’s something that we really like and we could definitely do it in the future.  There’s a lot that Rebels has that we haven’t talked about yet, so who knows.

SSG: Okay, great.  Previously, aside from Episode IV, all the movies and TV shows have had their figures come out a couple weeks to a month before the media launch.  With Rebels, there’s not a whole lot out there yet.  What’s the story behind that?

JN: A little bit of a delay getting the figures out.  They’re hitting shelves now.  They’ve definitely been shipped.  You’ll see a lot.  Everything we’ve been revealing at New York Toy Fair, Comic Con, and here as well, it’s all coming.  It’s a little bit later than we would have liked, but it’s on its way.

JN: No real specifics.  Mostly just us, our production scheduling.  Just a little bit later than we’d like.

SSG: Glad to hear they’re on their way.  So the Black Series 3 3/4” Episode III Darth Vader is a gorgeous figure – the sculpt is great – but sometimes the head enjoys popping off of the shoulders.  I don’t know if you guys have seen any of that.

JN: The neck itself is a little too high.

SSG: Are there any plans to modify that?  I know it’s being released on the blue-and-black TIE Pilot card.

SSG: On the same figure, there are some notches on his shoulder armor that seem to indicate, maybe, a different way of attaching the cape.  Was that explored?

SSG: You guys released a Yavin Ceremony Han figure in 2011 but it didn’t have the formal attire, the full sleeves or buttoned-up shirt.  Now that you guys have updated Luke, Leia, and Chewie from the same scene, are you going to do a new Han soon?

JN: No plans for that.

JN: No, not really.  For the figure we were able to put out at the price, we wanted to make sure we got the best amount of articulation and deco and we just felt that having a removable helmet wasn’t something that was critical to it.

SSG: So on the helmet topic, I see you’re releasing more Episode II clones.  You’ve got the Sergeant and now the Captain coming out for 6”.  Might we see the alternate helmets for that body, like the Episode III helmet or the pilot helmet?

JN: No plans for it right now, but it’s definitely something we could do in the future.

SSG: Great.  So the 6” Stormtrooper has the back peg hole for the Sandtrooper backpack.  Are you exploring other ways to add accessories to that, like maybe the Spacetrooper pack?

JN: Not right now.  That’s something that leaves the option open in the future to do that, but as of right now we’re not going to do that.

SSG: Cool.  So the 6” Anakin figure has two heads – the Jedi head and the angry Sith head.  It seems that the Sith head sits a little bit higher on the neck than the Jedi head.

JN: Oh, really?  No, it was not intentional.  If you’ve got that, that is a mistake.

SSG: Okay.  So originally the 6” Chewbacca figure was going to come out in the orange box look as number 13.  Some fans have actually found Anakin and the Clone from that wave packaged in a Chewbacca box, oddly enough.  That would seem to indicate that the production was at least a little bit far along on that version of Chewbacca.  Did any of those Chewies in the orange box make it out?

JN: No, they never were shipped out.  As a matter of fact, Chewie was the reason we went and decided to go with the new box structure because we weren’t happy with how he was posed out originally.  There was a photo you might have seen that had him posed out awkwardly and it wasn’t satisfactory to us.  So the new box allows us to have big figures like him stand straight up and that’s why he was pushed into that wave.

JN: Yeah, yeah.  We just reworked the window a little bit to give us a little bit more breathing room and let light into the top.  It’s good for all the figures, not even just the big ones.  Just gives a little bit more light.  Figures like Darth Maul, these darker characters on the dark background.  That opening in the top lets light come in more.

SSG: Absolutely, yeah.  On both the Biker Scout figures in the 6” and the 3 3/4” Black Series, some fans have noticed that the packaging around their visors is pretty tight to the point that it actually will warp the plastic.  Is there any way that this sort of warping can be avoided in the future?  Were you guys aware of this?

JN: No, we weren’t aware of it.  We’ll definitely talk to our packaging structure people and just make sure that doesn’t happen.  I mean, we have to secure them really tightly when they get shipped to make sure that we don’t have any paint rub or anything, no damage on the figure itself, so that’s why they’re so tight.  But if you’re seeing that it’s warping, that’s something that we need to address.

SSG: The 6” Han Solo that comes with the Tauntaun revealed at Comic Con is coming in a blue coat.  Will we ever get a brown coat version?

JN: No plans for it right now.  Maybe, who knows down the road.

SSG: The next 6” wave has Yoda, the Clone Sergeant, the TIE Fighter Pilot, and the carry-forward is Obi-Wan from Episode III.  Is that the case?

JN: That is the case.

SSG: I don’t know if it’s nationwide, but in some cases he seems to be a little bit of a slow seller in the orange package.  Is there any chance that he might be replaced by a better-selling repack figure?

JN: There’s heavier weighting to the other guys, the new guys, than Obi-Wan.  But as of right now that is the wave.

SSG: Okay.  Back in The Black Series’ first wave was R2-D2.  Will we be seeing that sculpt repainted as other astromech droids?

SSG: Some fans at the time thought that figure might have been a little bit under scaled.  Did you guys experience any of that?

JN: No.  We work really closely – obviously Lucasfilm is really adamant that we keep everything in scale and that the deco is accurate, especially in Black Series, so that was scaled properly.

SSG: Cool.  So, The Vintage Collection – I’m sure you guys are tired of hearing questions about that.

SSG: Obviously it was the basic packaging from 2010 to 2012, then had some exclusives last year, and really nothing this year.  Might we see that return again soon as an exclusive look?

JN: There’s always a good possibility for that.  We love Vintage, Lucasfilm loves Vintage.  It’s resting right now and we’re really going behind Black Series as our big collector offering.  There’s no reason that we wouldn’t bring back Vintage in the future, but right now it’s resting.

SSG: Speaking of exclusives, Kmart in the last few years has had a bunch of great collector-focused exclusives.  It doesn’t seem to have anything in the near future.  Will they be added back to the program soon?

JN: Yeah, absolutely.  There’s nothing specifically this go-round this Fall, but they’re definitely somebody we work with to make sure we’re offering exclusives.  You’ll see that in 2015.

SSG: Great.  I wanted to ask a couple more questions about some of the new stuff.

JN: Of course, sure.

SSG: The 6” Stormtrooper Luke, is that a different body?

JN: Yeah, the torso is actually a little different.  Obviously he’s shorter than Han, so partially it is new.

SSG: Okay, great.  On 6” Commander Cody, is that helmet removable?

JN: It is.  It’s a repaint, so he’s got the silver leg.  It’s not the Vintage one that actually comes apart and has all the pieces, but it is a reissue.  It looks very small right there, but the real one will be a reissue.

SSG: Han in carbonite, I noticed he doesn’t have knees.  Is it a prototype?

SSG: Is that carbonite block based on an older sculpt or is it a new sculpt?

SSG: Awesome.  Are those Jawas also a prototype?  Will they be smaller?

JN: They are a prototype.  They look a little big there.  When you do get the real figure, they’ll be in scale.

SSG: Great.  And then Commander Thorn, he’s got the big Hammer, the Thor-based “hammer” [the Z-6 rotary gun seen in The Clone Wars Season Six].

JN: I don’t know.  He is going to be coming with the two blasters.  I don’t know right now if we’re going to be able to include the hammer but it’s definitely something that we’re talking about.

SSG: Is there a timeline for when all this is coming out?  Spring 2015?

JN: Everything here is Spring 2015, yep.  We’ll get some stuff out in January and in March as well.

SSG: Awesome.  The 3 3/4” Boushh Leia has a detonator in her hand.  Is that permanent?  Does she have an alternate hand?

JN: I believe it’s permanent, yeah.  That detonator is permanent in that hand and then she’s free for her staff in the other hand.

SSG: Cool.  Does the R2-D2 in Mission Series with Yoda have an opening panel?

JN: It has an opening panel, yeah.

SSG: Does something come out of it?  The grabber arm for the lamp?

SSG: Awesome.  I see that Luke and Lando [in Saga Legends] have removable helmets.  Does Sabine from Rebels have one?

JN: Lando’s helmet doesn’t come off.  It looks like it does but it doesn’t.  Sabine’s does not, either.

SSG: But Luke’s does?

JN: No, Luke’s does not.  [Joe picks up the figure and tries to take off the helmet.]  You know, it might come off.  We might have changed it.  I know Lando’s does not.

Thanks to Hasbro and Joe Ninivaggi for answering our questions.

Be sure to check out our coverage from the event.

Great work, JabbaJohn! I have a much, much longer response in mind so I’ll take that to the forums, but thanks for getting all of this done, photos and an interview, very impressive.