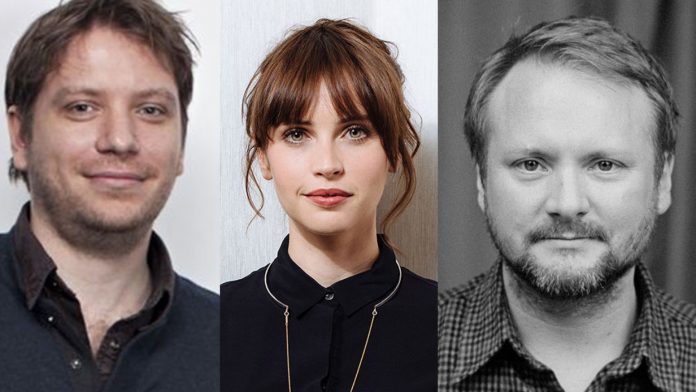 Rogue One is the title of the first spinoff, and Star Wars: Episode VIII will debut on May 26, 2017.

Disney chair and CEO Bob Iger revealed the new details at a shareholder meeting in San Francisco.  He also confirmed reports that Felicity Jones will star in Gareth Edwards’ spinoff and that Rian Johnson will write and direct Episode VIII.

Rogue One will hit theaters December 16, 2016.  The film is based on an idea from Industrial Light & Magic’s chief creative officer John Knoll, who will executive produce along with Simon Emanuel and Jason McGatlin.  Kathleen Kennedy and Tony Bo will produce, and John Swartz will co-produce.  Gareth Edwards is directing based on a screenplay by Chris Weitz; the first attached writer, Gary Whitta, recently left the project.  Academy Award nominee Felicity Jones is the first actress cast.

Coming just five months later, Star Wars: Episode VIII will return the saga to May release dates, coming out 40 years and one day after the release of the original film.  Rian Johnson will write and direct, and Kennedy will produce with frequent Johnson collaborator Ram Bergman.

See the full story at StarWars.com.

THE BOOK OF BOBA FETT WILL PREMIERE DECEMBER 29 ON DISNEY+