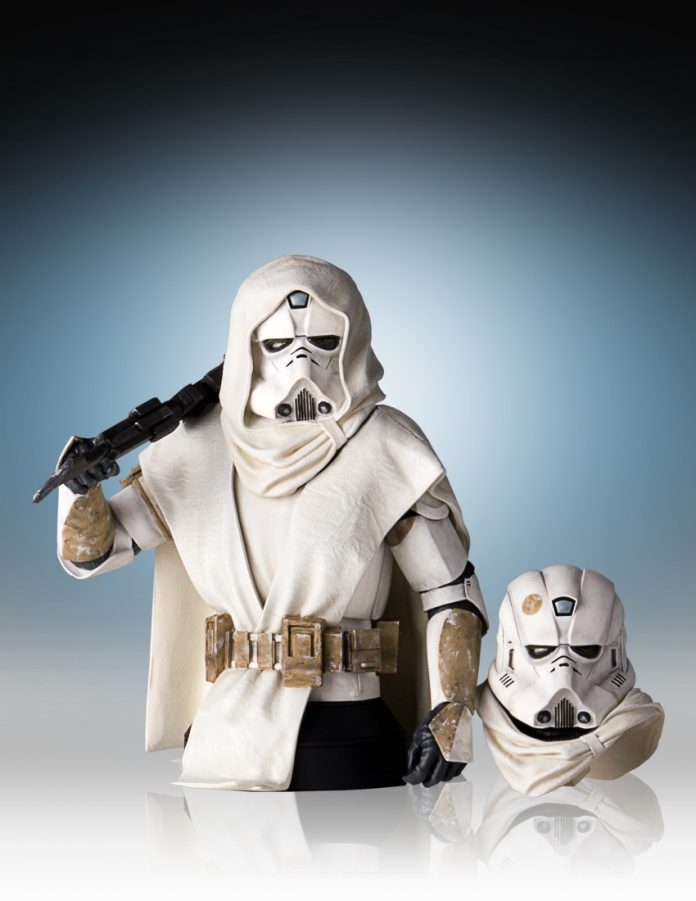 Commander Faie, a by the book, no nonsense clone, was the ideal soldier from the Kamino engineers who produced him. This was the cause of much aggravation to his Jedi General Quinlan Vos, who was anything but by the book. Sent to Kashyyyk to defend the Wookie homeworld from separatist attack, Faie and Vos fought a viscous campaign against the droid armies to keep the planet firmly in Republic hands. Ultimately though, defeat came from the betrayal of Order 66, broadcast to all clone commanders who began eliminating their Jedi Generals en masse. Vos, wounded but alive, was able to strike down Faie before his former subordinate could lay waste to a Wookie village in his hunt for the Jedi. Gentle Giant Ltd. is proud to present to our Premiere Guild members this deluxe bust of Commander Faie as seen in the concept art for Episode 3: Revenge of the Sith. Striking a powerful pose with his unique look, the one of a kind helmet can be displayed with or without the sculpted hood while the sculpted poncho over the armor adds a new dimension to the familiar clone trooper design.

High speed-low drag The role of Scout Trooper is one of the most coveted in the Galactic Empire’s military campaign to restore order to the galaxy. Operating almost autonomously in small squads on long range patrols, these troopers are a most unwelcome presence to the Rebellion and other maligned factions. Moving quickly on speeder bikes to outpace and flank their targets, Scout Troopers are known to first target enemy commanding officers with long range blaster rifles and then fall back to call in the heavy support. Gentle Giant Ltd. is excited to announce for our Premier Guild members the Imperial Scout Trooper mini-bust. With his long range repeating blaster, lightweight scout armor and macro-binocular equipped helmet, this trooper is ready to strike behind the lines.

“The son of Skywalker must not become a Jedi”

It was 35 years ago in The Empire Strikes Back that the feared Sith Lord Emperor Palpatine first felt a great disturbance in the force. Fearing the possibility of Luke Skywalker becoming a powerful young Jedi, he commands Darth Vader to hunt him down and destroy him… or turn him to the dark side. Palpatine will prey on Luke’s anger, fear, and desire for vengeance to realize his sinister goal. The path to the dark side is one travelled well by Palpatine, for he has led another powerful young Jedi down it before. So unfolds the Emperors plan to lure Luke into confrontation with Vader and, ultimately, learn his true destiny. Gentle Giant Ltd. is proud to announce for our Premier Guild members on the 35th anniversary of The Empire Strikes Back- the Emperor Palpatine mini-bust. With the meticulously sculpted folds and texture of his robes to the cold, menacing stare of the portrait, this mini-bust is the perfect visage of the evil Sith Lord.”