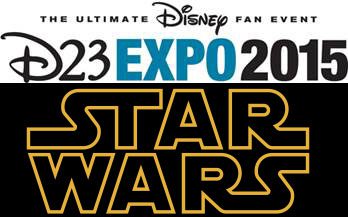 This year’s Disney’s D23 Expo in Anaheim, CA – August 14th through 16th – will have some Star Wars-related programming and exhibits worth checking out. We at SirStevesGuide.com will be there to cover all the goodies, but if you also find yourself at the expo, here’s a rundown of what to see and when to see it.

Star Wars creator George Lucas, composer Danny Elfman, All My Children star Susan Lucci, Disney Animator Andreas Deja and other beloved contributors to the Disney legacy will be named and honored as official Disney Legends during D23 EXPO 2015 at 10 a.m. on Friday, August 14, in Hall D23 at the Anaheim Convention Center. The ceremony will be hosted by Disney Chairman and CEO Bob Iger, and will include special musical performances.

GEORGE LUCAS, whose Star Wars films made him one of the most successful filmmakers of all time, is also a longtime Disney fan who has left an indelible impression on Disney parks. His first project with Disney was Captain EO, the 1986 3-D spectacular starring Michael Jackson and directed by Francis Ford Coppola. Star Tours and Indiana Jones Adventure at Disneyland, as well as Indiana Jones Epic Stunt Spectacular at Disney’s Hollywood Studios, Indiana Jones et le Temple du Péril in Disneyland Paris, and two blockbuster Indiana Jones Adventure attractions at Disneyland and Tokyo DisneySea round out Lucas’ timeless work in conjunction with Disney.

Worlds, Galaxies, and Universes: Live Action at the Walt Disney Studios — Saturday, 10:30am to 12:30pm, Hall D23
Disney, Marvel and Lucasfilm are home to some of the planet’s best storytellers, immersing audiences fully in the world of each film from beginning to end and beyond. In this exclusive Hall D23 presentation, join Walt Disney Studios Chairman Alan Horn for a tour of upcoming live-action projects from these legendary film studios. A bevy of special guests will be on hand to offer a look at an unparalleled slate that includes Alice Through the Looking Glass, The Jungle Book, Marvel’s Captain America: Civil War, Star Wars: The Force Awakens—and much, much more.

– For the first time at D23 EXPO, Walt Disney and Pixar Animation Studios have created a joint experience no Disney fan should miss. With live demonstrations, presentations, and autograph signings with top filmmakers from each studio, plus free giveaways and interactive displays featuring the films Inside Out, The Good Dinosaur, Zootopia, Finding Dory and Moana, this is a can’t-miss attraction for animation fans.

– Explore costumes, props and photo ops from the Studios’ live-action films, including Disney, Marvel and Lucasfilm.

Disney Interactive Pavilion
– Players will join forces with Star Wars, Marvel, Disney and Disney•Pixar characters in Disney Infinity 3.0 Edition, the next chapter in the best-selling “hybrid toy / video game” series. Guests will have the chance to play some of the new Disney Infinity Play Sets, Star Wars™ Twilight of the Republic, Star Wars™ Rise Against the Empire and Disney•Pixar’s Inside Out, and the fully enhanced Toy Box mode.

Pavilion guests will also be able to visit the “Only in the Toy Box” Experience. Using a new augmented reality technology, fans can step into a virtual Toy Box environment and interact alongside their favorite Disney, Disney•Pixar, Marvel and Star Wars characters found inside Disney Infinity. Disney Infinity will also be giving away thousands of pre-release Disney Infinity 3.0 Edition figures featuring popular characters from across The Walt Disney Company (while supplies last).

– Pavilion guests will also be able to live out some of their Star Wars battle fantasies by going hands-on with Star Wars Battlefront.

– In the pavilion’s game lounge, fans can take a break from the show floor and try out the hottest mobile games including Star Wars: Commander, Frozen Free Fall and LINE: Disney Tsum Tsum.

– Disney 3D Print Studio is offering fans the chance to personalize new figures, including a Disney Mouseketeer, Star Wars stormtrooper, and Marvel’s Iron Man, with their likeness through the use of facial-scanning kiosks. Marking the first foray into 3D printing by Disney Store, the figures sold at EXPO will feature unique packaging with a special D23 Certificate of Authenticity.

… And more! We’ll keep updated with everything Star Wars at the D23 Expo. Tickets and more info are available at D23expo.com