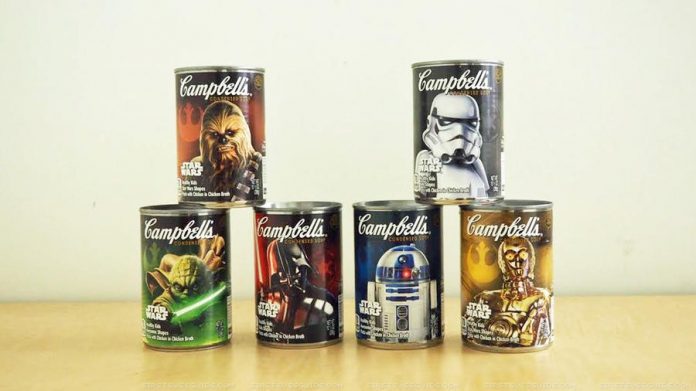 LATimes.com has reported that Campbell’s is releasing limited-edition “Star Wars” chicken noodle soup and SpaghettiOs later this month. That means you can have a bowl of little Yodas, R2-D2s, Stormtroopers and Darth Vaders for breakfast, lunch or dinner.

The soup cans feature pictures of a cuddly Chewbacca looking lovingly out into the distance, a fierce Yoda holding a green lightsaber, R2-D2 looking demure, Darth Vader being Darth Vader, a pensive C-3P0 and a Stormtrooper staring straight at you.

There is no evidence that the soup will taste better with “Star Wars”-shaped noodles. But you can stage a battle in your bowl if you want to. The “Star Wars” soup cans will be available nationwide later this month for $1.79 each.

Campbell’s Soup Brings the Force to New York Comic-Con – And the Soup Aisle – With an Exhibit Inspired by Lucasfilm’s Star Wars: The...