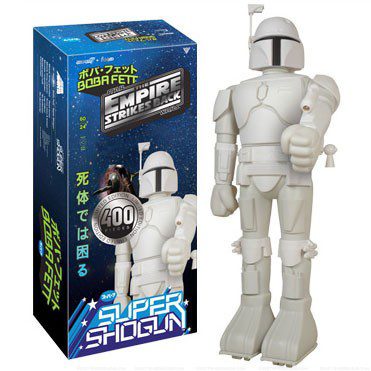 Super7 and Funko are proud to announce the third colorway of Boba Fett from the Super Shogun line. The ‘Prototype’ Edition is the most limited release prior to the ‘Kenner’ and ‘Empire Strikes Back’ edition at only 400 pieces.

The Star Wars Boba Fett Super Shogun stands a whopping 24 inches tall, and includes all of the features that you expect from an authentic Jumbo: free rotating wheels on the bottom of his feet, and spring-loaded missile firing jetpack and wrist launcher. Utilizing the same techniques implemented by Japanese toy manufacturers in the 1970s, the Super Shogun is constructed from durable, blow-molded polyethylene with a painted vinyl helmet. Collectors of both Japanese and Star Wars memorabilia are sure to be impressed with the care taken to fuse the disparate concepts into its own unique entity.

Includes metallic foil stickers are included to allow fans the option to customize the torso with the character name in English or in Japanese.

Super7 ‘May The 4th Be With You’ Offerings