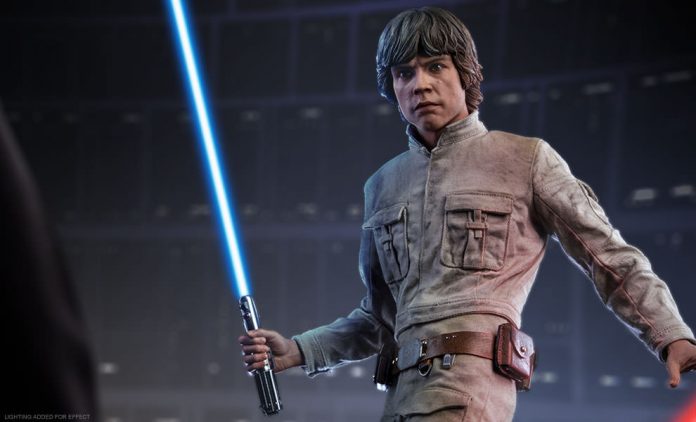 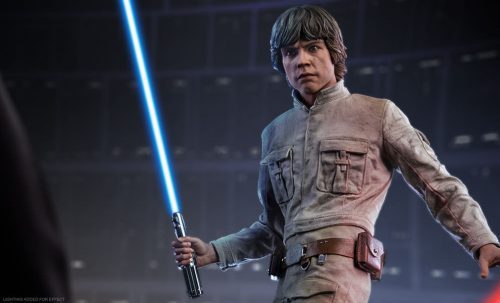 You know it to be true- Next in our line of Star Wars collectibles, Sideshow is excited to present the Luke Skywalker Premium Format Figure.
After growing strong with the Force on Dagobah, Luke Skywalker returns to Bespin to face off against his ultimate foe and discover his destiny.  Based on his appearance in Star Wars Episode V: The Empire Strikes Back, the Luke Skywalker Premium Format Figure has a detailed, life-like portrait that captures the likeness of Mark Hamill.
Standing at about 20” in height, Luke prepares to meet his destiny on a Cloud City base inspired by his famous duel with Darth Vader.  The statue has an authentic Episode V costume sewn with fabric and pleather elements, with realistic fatigue to show just how far Luke has come in his quest to become a Jedi.
Costume Fabrication Artist, Esther Skandunas said:  “Working on this piece was a fun and engaging challenge.  Luke’s costume is very detailed. As such, we worked with copious amounts of reference material to ensure everything was as screen accurate as possible, down to the correct placement of his pockets. The costume and its coloration add that extra dynamism to the statue that captures the fullness of Luke Skywalker’s story in Episode V.”
He comes holding his blue lightsaber, which has a light-up LED feature, as he prepares to defend himself against the dangers Bespin has in store.  His belt comes with an additional pistol to holster in his belt while his saber is in action.
The Exclusive edition of this statue comes with an alternate right hand holding his blaster pistol, with a sheathed lightsaber to hang from his belt for added display options. Project Manager, Mike Tolentino elaborated:  “This statue captures a crucial moment on Luke’s time on Bespin.  When displayed with the lightsaber in his hand, he appears ready to discover his destiny in his fight against Darth Vader.  With the exclusive blaster in his hand, Luke is searching in Cloud City for Leia and Han.  Each varied display option enhances the story that this piece tells in your collection.”
Search your feelings and order the Luke Skywalker Premium Format Figure for your collection today.  It is your destiny! Pre-order now from SideshowToys.com