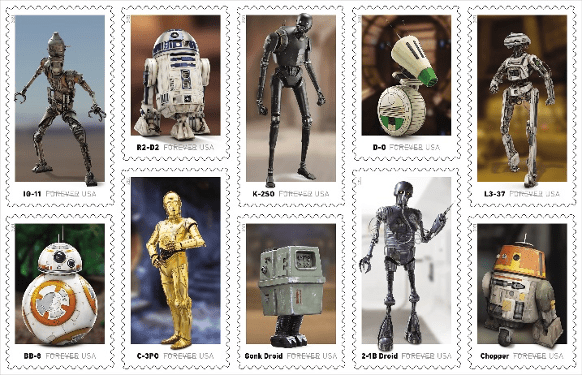 The first characters fans meet in the first “Star Wars” film, “Star Wars: A New Hope,” are droids — namely C-3PO and R2-D2 — and droids have continued to play pivotal roles throughout the “Star Wars” galaxy.

With 10 dazzling new character-inspired stamps, the Postal Service salutes beloved droids from the “Star Wars” galaxy and the imagination that brings these technological marvels to the screen.

The characters are shown against backgrounds representing settings of memorable adventures. The selvage features a passageway from the floating Cloud City above the planet Bespin, introduced in “Star Wars: The Empire Strikes Back.”

These droids are a nod to Lucasfilm’s, as well as its parent company, Disney’s, commitment to science, technology, engineering, and math (STEM) learning and the continued collaboration between “Star Wars: Force for Change” and global pre-K-12 nonprofit organization “FIRST” (For Inspiration and Recognition of Science and Technology).

Lucasfilm, the studio that created the “Star Wars” franchise, is celebrating its 50th anniversary in 2021.

Greg Breeding was the designer of the stamps and pane. William Gicker was the art director.

Additional details about the new “Star Wars” droid inspired stamp collection, including the issue date, will be announced later this year.

Customers may purchase stamps and other philatelic products through the Postal Store at usps.com/shopstamps, by calling 800-STAMP24 (800-782-6724), by mail through USA Philatelic, or at Post Office locations nationwide.

The Postal Service receives no tax dollars for operating expenses and relies on the sale of postage, products and services to fund its operations.

Lucasfilm, the Lucasfilm logo, “STAR WARS” and related properties are trademarks and/or copyrights in the United States and other countries of Lucasfilm Ltd. and/or its affiliates. © and TM Lucasfilm Ltd.