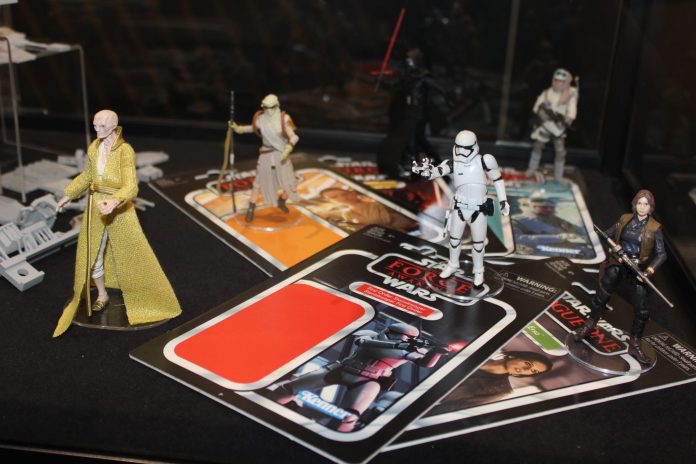 With TVC, there’s not that many accessories, just include the extra forearms that replace the gloves, the extra head to make a more rounded Kylo Ren, there’s no reason for incompleteness at these prices, those things are crucial for a collector-focused line. Oh man, 20 years since The Phantom Menace. I can’t wait to not buy 6″ Jar Jar and Little Ani. Can this brand support a $20 figure on a meme? Because I don’t like pegwarmers, they’re coarse, and rough, and they stay everywhere. Might as well repaint some of the older 6″ figures with this new system, it’ll… Read more »

I should have asked about accessories in addition to or instead of changes, but I suspect the answer would be the same. I guess that’s why repacks typically tend to come with the same accessories, so they can still count as the same item. I wonder if Rebels would have performed better or worse as its own line, instead of packed with 5POA movie characters from the start. Cutting the line as the show is not only ending, but getting better and more interesting with more varied designs, is also exactly what happened with The Clone Wars. Hopefully they at… Read more »

Thanks for posting, some good stuff there. Sad to hear the micro machines line is on hiatus but glad to hear we're gonna see a lot more TVC figures that in the past few years. Hopefully, they won't ALL be repacks.

I'm curious if moving production from China to Vietnam or elsewhere translates into reduced prices for the consumer. I haven't detected anything but price increases the past few years.

Maradona I'm curious if moving production from China to Vietnam or elsewhere translates into reduced prices for the consumer. I haven't detected anything but price increases the past few years. At best, I think you can say that they've offset their even worse increases by savings in Vietnam. That seems to be the case on Transformers, anyway – their costs go up so they scrimp everywhere as they struggle to stick to their current pricepoints, even going as far on Voyager-class figures to use stickers instead of paint for decos. But the truth is that consumers are not going to… Read more »

With regards to 6″ and movie anniversaries. 2018 is almost a non anniversary year. Maybe 10 years for that Clone Wars movie? But they could finish the 21 backs. Fett, Greedo are already made. Greedo peg-warmed, but what about packaging him on a vintage card, then making Ponda Baba and Momaw Nadon, and Zutton, putting them on Vintage cards. Then having collectors order a four pack? C3pos body could be used for the Death Star Droid, snaggletooth could be repainted blue and an exclusive that gets pre-ordered, and the gonk would be a new sculpt that they could reuse for… Read more »

I suppose we have to wait until Toy Fair 2018 to get any info on the Han Solo film's toy line, but if Hasbro is going with a three month lead time to films in the release of their corresponding toy lines, the film's line will be released right around Toy Fair. That would mean mean once the TLJ line gets clearanced out in January, it will be quickly replaced with the Solo film line in February to give it comparable time on the shelves to the previous lines before the releases TFA, RO, and TLJ. Or do you think… Read more »

Where is animated Lando from Rebels?
3 3/4" to start with.

ABOUT US
FOLLOW US
©
wpDiscuz
11
0
Would love your thoughts, please comment.x
()
x
| Reply